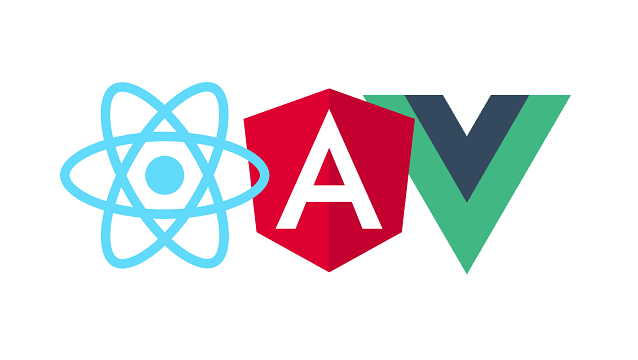 The top 3 front end development frameworks which are being widely used by developers nowadays are listed below along with their advantages and disadvantages.

AngularJS framework has been developed using JavaScript and its an open source framework developed by Google. The core advantages of this framework are listed below :

This framework helps the develops to save time and cost as it does not require additional lines of code for synchronization of view and model.

Front end developers can create rich and dynamic web pages with this framework in addition to assigning special behaviors to the document object model.

The dependency injection feature of this enables the developers to reuse, manage and test different components of the code.

The community of Angular JS is huge and tutorials, training material and discussions are easily available.

React JS is an open source library build on Java Script which is utilized by front-end developers for building users interfaces of a website. This framework is maintained by Facebook, Instagram and a group of developers. The core features include the following :

Provides the users with an enhanced user experience due to the available of a virtual DOM making web pages faster and more dynamic.

Code components can be reused at any time or level during the development procedure which results in saving time.

The downward data binding feature of React JS framework ensures that the changes made by the developers in child structures do not influence the parent structures. This features provides code stability and avoid unexpected bugs and issues in code.

Vue.js is an open source web application development framework which provides developers with a View Model layer based upon MVVM architecture. The core advantages of this framework comprise of the following :

This framework is smaller in size as compared other bulky frameworks like Angular and React but it still outshines them when it comes to speed and performance.

The large scale development templates enables the front end developers to save time and the simple and uncomplicated structure also speeds up the development procedure.

The integration of the web pages build on this framework is quite easy as well. It is highly recommended for building single page web applications as well as adding up new components to already existing web pages.

The documentation provided along with Vue.js is comprehensive and detailed making it easier for beginners to use it if they have basic HTML and JS knowledge.

This framework is flexible to work with and responsive as well.

All of the above mentioned front end development frameworks have their own advantages and disadvantages. Angular JS and React JS are more popular among these due to their vast community and evolutionary features as compared to Vue.js.

If you are looking to hire developers for front end programming, then Aalpha can help you, contact us today.

Google's UI system toolkit, Flutter2.0, is in its second version. It is used to create incomprehensible desktop, mobile, and web applications. You would now be able to create a variety of different types of applications using a single codebase. Since the release of Flutter 1.0 and its enormous accomplishments, app developers have been waiting for the stable release of this UI toolkit. So, let's look at the main features of Flutter 2.0 that help accelerate mobile app development. Increased web support Perhaps the most significant improvement in Flutter 2.0 is the excellent web support. Flutter is an app-driven system that…

eCommerce is on track to become a significant participant in the global retail industry. One of the most significant aspects of joining the eCommerce industry is how simple it is now. Many businesses may provide you with everything you need to launch your online shop in a matter of clicks. Choose an appropriate eCommerce platform, and you're off to a great start! Why should one use WordPress? WordPress is a free and open-source content management system created by a volunteer community and a core group of key developers. More importantly, WordPress powers about a quarter of all websites on the internet,…

The Process of Serverless Application Development

A serverless application paradigm is rapidly gaining traction as a preferred development architecture. When a team contemplates developing a serverless application, they must re-adapt to the Cloud's unique architecture. Serverless Architecture: How Does It Work? Serverless computing is a way of building and distributing apps without worrying about the underlying infrastructure. The external partner manages the server space, not the business. Businesses have one less concern with this strategy: with the backend outsourced, the front end becomes the primary focus. Backend As A Service (BaaS) The serverless architecture is predicated on the concept of obtaining a backend. You pay an…