Clean architecture is among the architectural styles which is simply a set of guidelines. Robert C. Martin is the one who proposed the clean architecture design to act s a blueprint for modular systems to ensure strict guidelines when it comes to separations of the overall design principle. The main purpose of clean is to create a simplified, easy to maintain, and extendable layered architecture. So, what does a clean layer pattern entail? And What are the principles? Keep reading below.

The Layers of a Clean Architecture

In a clean architecture, the application’s dependency is designed for stability purposes. Since there will be components that aren’t stable enough, they should depend on the more stable components. So, the code used in this pattern is easy to maintain, reuse, and decoupling.

Since clean architecture is all about separating software elements, the layers include:

This is at the center of the ring, which is the core of the business needs, logic, and rules. The domain layer creates the purpose and role of the app while forming the application’s foundation. The layer has entities that represent the interface and class needed by the business rules.

The entities don’t have any understanding of other layers, and they do not depend on other components found in the other outer layers.

This layer holds gateways and APIs responsible for controlling the flow of communication between external components and the back-end of the application system. The adapter layer enhances controllers, views, and presenters of the application. While clean architecture is concerned, all the external components shouldn’t depend on persisted data in the database or have knowledge of the data in the database.

This is the outermost layer which serves all the details about the data models being used and web frameworks. The details are extracted from the domain layer because the team will change databases and frameworks more often. After the abstraction of the details, the teams can then modify and update the user interface, data models, and structural code without affecting the domain layer’s foundation.

The Principles of Clean Architecture

For a clean architecture to become effective, there must be a set of rules and design applications to enhance the process. These principles include: 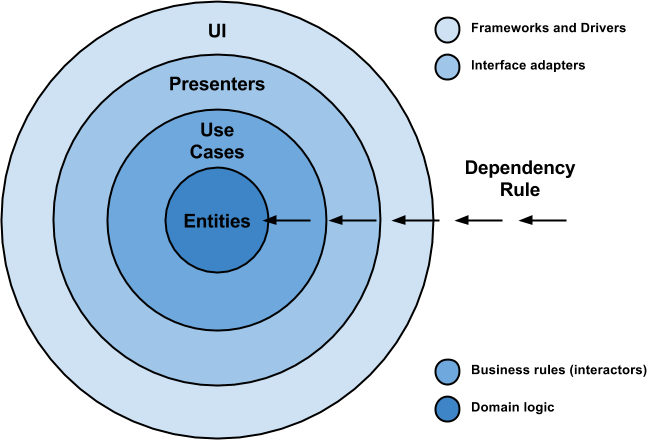 This principle requires the application components to have shared classes where the classes in each collection must change at the same time for the same causes. So, the common closure term means that classes that change due to the same reason must exist in an enclosed set.

The dependency rule involves the process of controlling application flow dependencies. The rule of dependencies is that they can point inward since the inner layers are meant to be independent, i.e., no knowledge of other outer layers.

When several components contain a loop of dependencies as feedback, it means you have a dependency cycle. In such an instance, it becomes hard to implement crucial changes whenever the need arises. So, the rule of the ADP principle means there shouldn’t be any dependency cycles in an app. However, in the case when there is a dependency cycle, the only solution is to break the cycles through a process called dependency injection.

The adapter is the slot interface, where the ports are the interfaces shown through the application. The adapters are tech-specific, which allows them to control specified adjustments whenever the need arises for a given component. On the other hand, the ports depend on technology. The clean architecture relies on the adapter and port pattern (hexagonal architecture pattern) when implementing the separation process since both the port and the app must know the tech-specific details controlled by the adapter.

In this principle, the classes in a component should be reused at the same time. Should you reuse one, you reuse all. This principle is the same as the one in solid, whereby it prevents the classes from accessing the methods they don’t use.

This is a list of 5 object-oriented design rules. Here, all teams must follow the rules to create a maintainable, flexible, extendable, and simple software architecture. The rules governing this principle are called Solid principles.

This principle is for the idea that any release shouldn’t have a collection of unrelated classes. So, each module or class released should be reusable as an independent unit while following a predefined process while releasing.

This implies that the architecture doesn’t rely on any existing library. Hence, a developer can use the framework in place of a tool without limiting the system’s functionality.

Depending on your business rules, you can switch from oracle or SQL server with CouchDB, BigTable, or MongoDB as long as the rules of your business aren’t related to the database.

While testing the business rules, you can achieve the whole process without external components like a web server, database, or user interface.

Independence from any external service

All your business rules are simply independent, i.e., they don’t have to do with any outside information.

The field of app development is growing immensely. Whether you are a beginner or an amateur in this field, you can always learn the latest trends and determine how to apply them in the development process to simplify the processes and make everything easy.