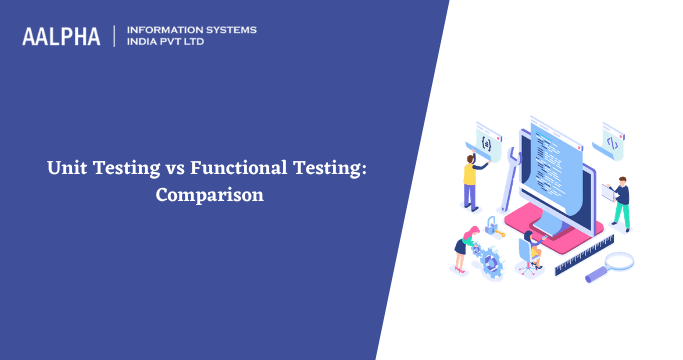 Any software or application testing effort should aim to provide a high-quality product. Therefore, the testing method is built based on unit and functional testing.

Unit Testing vs Functional Testing: The primary distinction is as follows

Unit Testing – What Is It?

Unit testing is a widely used technique in many companies since it mainly assists in reducing the chance of having a problem in code.

As the name implies, unit testing is a kind of software testing in which individual units or components are tested. The goal is to verify and ensure that each unit of software code performs as anticipated.

Unit testing aims to decompose the source code into smaller units and verify that each component functions correctly. This means that if any set of inputs is invalid, it should return the expected output.

The Primary Goal of Unit Testing Is to:

The Benefits of Unit Testing:

How Is Functional Testing Defined?

The Primary Goal of Functional Testing Is to:

The Benefits of Functional Testing

Functional testing is required to evaluate a software application’s performance and functioning before delivering it to the customer.

What Are the Purposes Of Both Types Of Testing?

Unit testing is a kind of software testing in which individual pieces of code are tested independently. Unit testing is used to isolate the minor testable components of an API and verify that they operate correctly in isolation. A unit test may validate many behavioral elements of the system under test, but its primary purpose is to ensure that the system delivers the expected outcomes.

From the developer’s viewpoint, unit testing’s goal is to build a robust codebase at a low cost. Additionally, unit tests provide appropriate documentation for higher-level testing, such as integration and functional testing.

In functional testing, the tester is not concerned with the core code; instead, they must verify that the result meets the user requirements and is consistent with the expected output.

The primary goal of functional testing is to validate the system’s functionality. Functional tests cover the whole software stack – from the front end to the back-end database systems. Additionally, they are a kind of integration testing that verifies that all components function as anticipated.

How Do Unit and Functional Testing Contribute to Software Quality Improvement?

Occasionally, the code you create will be extensive, and you will lose track of it for an extended period. And if you want to rework the code a few months later, you may wind up breaking it. In such situations, the unit test enables you to record and subsequently fix your original code. Additionally, it guards against regression. Code errors are detected nearly quickly, which results in reduced rework and retesting.

It verifies that the application or system operates as intended. Typically include extensive testing to ensure that crucial app functionality, such as user logins, signups, the payment gateway, and other critical user processes, behaves as anticipated.

There are many kinds of functional testing, each with its own set of advantages. For instance, integration testing verifies that all of the integration components function correctly. Smoke testing validates the build’s essential features, saves time, and minimizes regressions.

Developers must distinguish the goal and scope of unit tests from functional tests. Both tests are not interchangeable since they are employed for distinct reasons. Both offer several benefits and disadvantages.

While unit testing is quick and helps create clean code, it does not give confidence in the application’s functionality. Instead, it enables us to pinpoint the location of the problem/error in the code.

However, functional testing is time-consuming and complicated. Nevertheless, it guarantees that the system functions according to the requirements. Moreover, it enables us to pinpoint the source of the problem/defect in the functionality. Hope you’ve got the comparison of unit testing vs functional testing.

Any queries about software testing? Feel free to contact us & get a free consultation from our experts.